Week 1 was kind of crazy. Winnipeg shocked Hamilton, Michael Reilly just started to play in the 2nd half, Toronto upset Calgary, & Ottawa somehow pulled a victory out of nowhere.

Here are some things I noticed:
To me, the most surprising result of the weekend was Ottawa winning outright against Edmonton. Insanely, Ottawa dialed up a hearty 2.3 yards per play, while giving up 6.3 yards per play. This is the lowest offensive output by a winning team in the 2010-now era, as seen by the graph below. 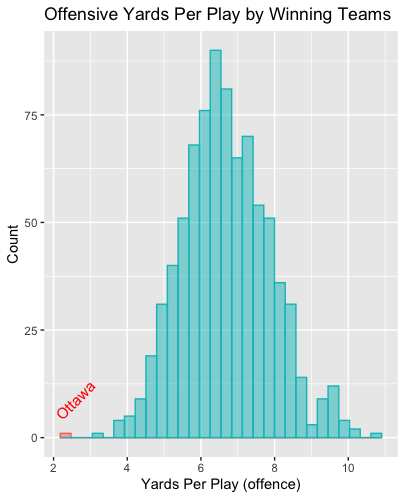 Edmonton played a decent game, if you can ignore the backbreaking turnovers. One area that I found interesting was James Wilder accruing 12 targets. These 12 targets summed up to -6 EPA, which means they were not particularly valuable. I'd like to take a deeper look into why.

Of these six plays, the only one remotely positive is the 6 yard gain to get a first down. Wilder was, however, more efficient on first downs, catching every target & averaging 9.5 yards per reception.

As well, to be fair to Wilder, lots of times the RB gets "saddled" with being the last option on offence. Harris would look and look but be out of time, and rather than taking a sack, he would dump it off to Wilder who didn't have a great shot at a first down.

Long term, however, RB targets are not normally a source of success, and Harris will have to get other receivers way more involved if the offence wants to click like 2019. Saskatchewan's defensive line was lined up very uniquely on some 2nd and longs. Often, they would have 12 men on their feet, and their defensive line would be 2-3 yards off of the line of scrimmage. It just seemed kind of weird!

Toronto's win probability hit ~10% in their victory over Calgary, making it the biggest comeback of week 1. Toronto had just punted the ball away with 9 minutes left, down 8, and Calgary had the ball on their own 30. Charleston Hughes forced a fumble, and two plays later, the game was tied.

Mcleod Bethel-Thompson took advantage of his opportunity to start, delivering Toronto a victory, putting in the best QB performance of the week and the 3rd best of his career.
Finally, an update. I should be putting some sort of CFL Fantasy corner up on the site soon, as it has been heavily requested. Look forward to that in the next few days!