Welcome to ETstats Football. I’ve simulated the CFL Season 1000 times, and here are the results: 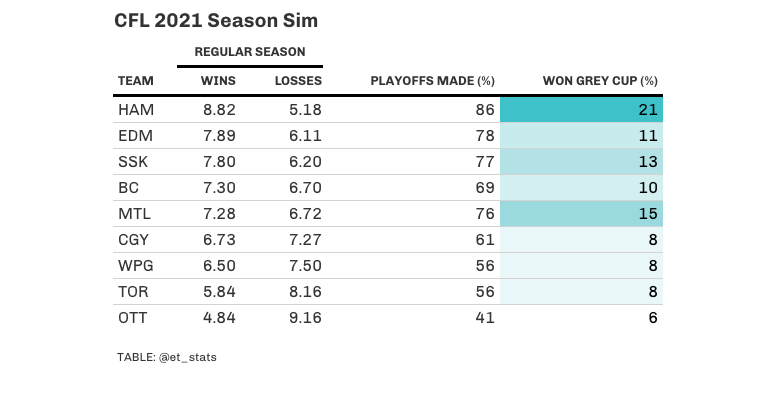 What goes into these?

This is an Expected Points Added (EPA)-based model. EPA is a metric that measures the success of a play based on its impact on scoring or giving up points. For example, EPA would see a 5 yard gain on 2nd and 3 as significantly better than a 5 yard gain on 2nd and 10, which likely leads to a punt or field goal. There is a good explainer on EPA here.
I take EPA and then weight it and try to remove more of the big outlier plays to make it more predictive. This means down-weighting areas like fumble returns to arrive at a better guess for a team’s strength going forwards. My version of predictive EPA is measured based on the starting QB, the offence, and the defence, so that a change in QB can be accounted for.

Is the sim static?

No, a static sim would take pre-season metrics and use only those pre-season metrics, even in the simulated Grey Cup. Throughout the year, the metrics I am using to calculate single game win probability shift and change as games are played. This is reflected in the simulations (which is a pain because it makes them take soooo much longer). This is also why some of the percentages (especially Grey Cup %) are a little wacky. Simply put, it takes too much time to smooth those out when using a dynamic sim. So, to start the year, a team’s strength is measured looking backwards at previous years, but as games are simulated, it uses a mix of the simulated data and previous years data to calculate team strength.

Obviously, this is not a normal season. Many considerations had to be made as the league missed a year, and as such, there was no data for any of the teams. Again, my game prediction model relies on individual QB results, team offence strength, and team defence strength. The increased time in between seasons has led to me being significantly less confident in the team-based metrics, and as a result, brings the team-based metrics closer together. For example, Winnipeg and Saskatchewan had the two best defences in the league in 2019, but it does not feel right to me to predict them to be as good as 2019. Likewise, one would expect Montreal, Toronto, and Ottawa to improve from their 2019 defensive performances based on new signings, coaching changes, etc..
Let’s chat about some of the more interesting results. Firstly, I’m sure that Montreal’s Grey Cup chance stands out. Though it could just be a sample size issue, I’m for sure bullish on Montreal as a whole. Montreal had a fantastic offence last season, but a horrid defence. Normally, offensive production is significantly more predictive, especially after an off-season. As well, Montreal’s ranking comes down to my model disliking both Toronto and Ottawa. For Toronto, I’m a little scared that Nick Arbuckle is not going to be a massive upgrade over McLeod Bethel-Thompson. It certainly is possible that my model is blind to the other upgrades Toronto has made, and that is causing me to underrate them. Continuing, due to the shortened season and the schedule, I have a West to East crossover occurring just 14% of the time, which means (according to my model), Montreal or Hamilton will have a significantly easier Semi-Final than the 2nd seed in the West. 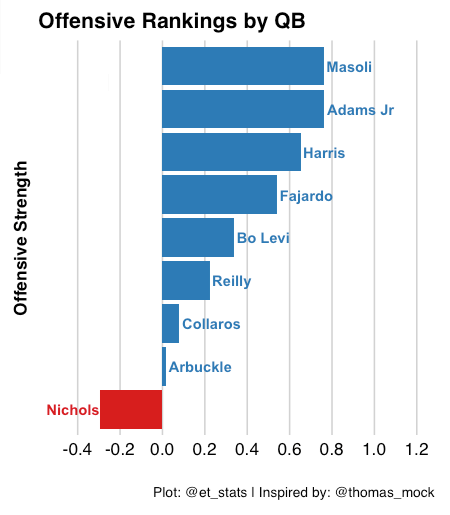 I also seem to be down on Winnipeg, the defending Grey Cup champs. This, for sure, comes down to Zach Collaros. Collaros played a total of 4 games with Winnipeg, and was pretty good! His two seasons previous to that, however, were not his best. As such, it is tricky to project how well he will play this year. Winnipeg’s defence was fantastic last year, and as I said above, defence “carries” significantly less season over season, so it will be interesting to see if they can again be one of the top defences in the league.
The West is a bit of a jumbled mess. Honestly, I would not be surprised if any one of the five (save for maybe Winnipeg) came in first. I slightly favour Edmonton and Saskatchewan, due to Trevor Harris & Cody Fajardo, but it would be a fool's errand to count out previous MOP’s like Bo Levi Mitchell and Mike Reilly.

Overall, I'm super excited for this season. I'm sure I will look dumb on a couple of teams, but I'm just ecstatic to watch some CFL Football.